Festivals from seven countries across three continents were last night crowned winners at the 2nd International AGF Awards, organised by A Greener Festival.

The ceremony took place at the Royal Garden Hotel in Kensington High St, London, as part of the Green Events & Innovations Conference and on the opening night of ILMC32, and was supported by Stack-Cup.

To be considered for an award, festivals must undergo a detailed assessment, a site visit, and analysis as part of the evidence-based Greener Festival Award scheme. Winners are those who scored highest across ten categories over the last 12 months. The International Greener Festival Award is the highest overall scoring festival, across all festivals that were assessed globally.

Co-Hosts Ben Challis and Claire O’Neill of A Greener Festival presented the awards.

And the winners are: 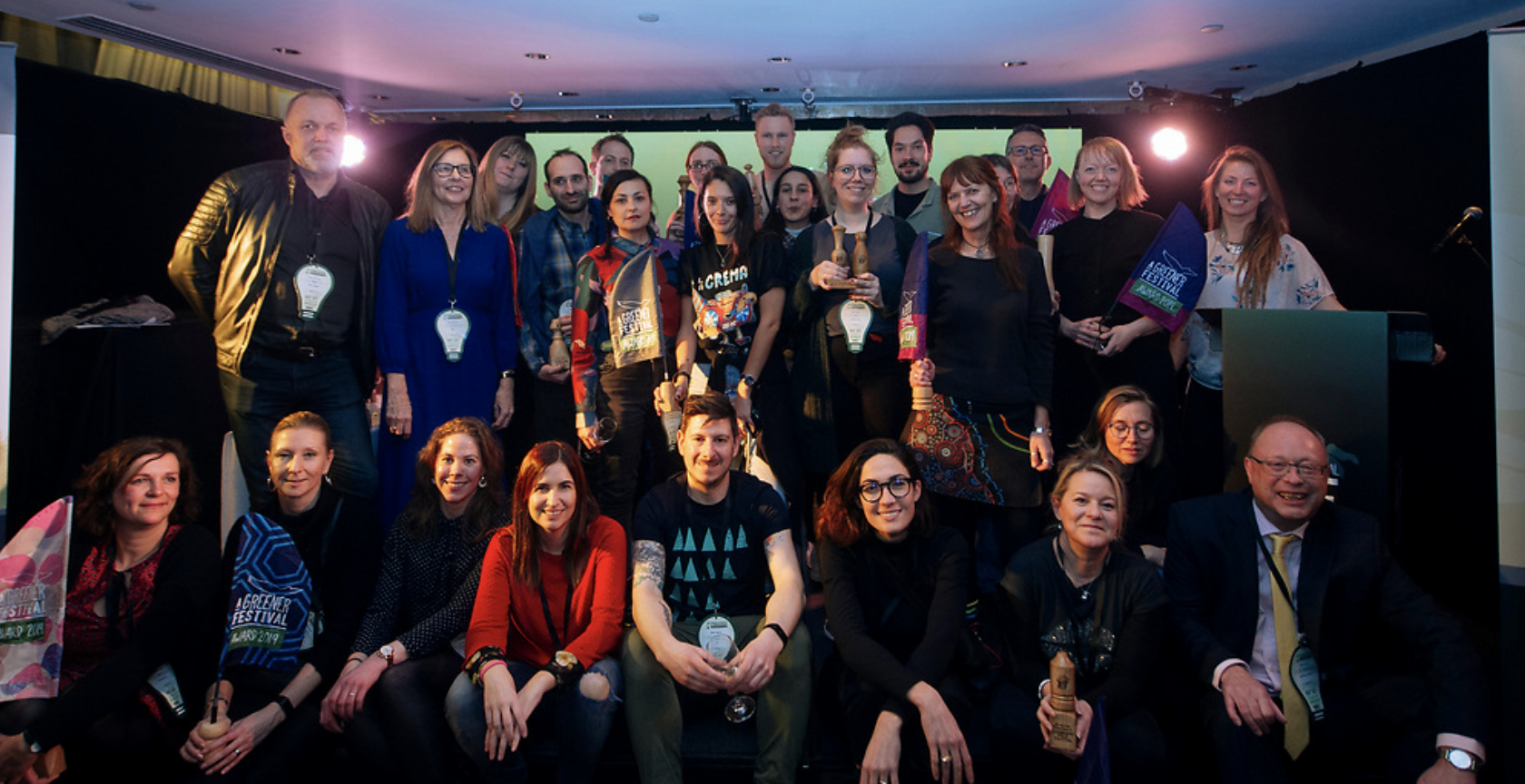 WHY THE WINNERS WON:

International Greener Festival Award
Øya festival in Oslo has been pioneers and passionate drivers in the green event space since their dedicated environmental actions began in 2002. This has gradually grown to be an integrated space of management, manifested in sustainable food experiences, a green purchasing policy, fossil-free transportation, emission reductions, and sophisticated resource management. The organisational focus draws on experience and competent external partners to achieve pioneering new standards for environmental festival management. Øya has gained national recognition as a special festival of expertise and willingly shares the experience with other festivals – locally and abroad. In 2004 it contributed to making a festival specific criteria for the national Eco-lighthouse certification, and a guide book to environmental outdoor events, revised in 2017. Øya were one of the first festivals to speak at GEI back in around 2008 and have been Outstanding award winners in the Greener Festival Awards for over 10 years.

AGF Greener Transport Award
Cambridge Folk Festival is a 14k cap camping festival a short distance from the Cambridge City Centre in the UK. Visitors are provided with a free local bus pass and large bike parks. Car use has been steadily decreasing each year and there are detailed surveys about travel choices and actions. Staff are mostly local or stay onsight and contractors transport was reduced a further 12.5% in 2019. Artists ground transport emissions were reduced by 30% due to fewer journeys. The event communicates with the artist about balancing travel impacts and measures mileage and emissions.

AGF Greener Catering Award
20k cap DGTL Festival Amsterdam is a 2-day non-camping electronic festival in the City and an innovative force in all areas of festival sustainability. They champion the Circular Food Court, where all caterers are obliged to buy surplus and imperfect food as much as they can. The collective of chefs creatively use residual flows of food, cook plant-based and rethink food systems. In addition to composting all organic residuals flows, there is a focus on the ingredients and the way in which we cook (including technology and infrastructure). The menu is dictated by the residual flows of ingredients available. All meals served are vegetarian. They also provide a visual representation of food impacts on audiences to help raise awareness in eating habits and choices.

AGF Greener Power Award
For the second year running the AGF Greener Power Award goes to the pioneers of the 100% renewable energy festival, The Green Gathering. This festival empowers participants to realise the possibilities of living off-grid. The festival runs on solar energy (plus sometimes a little wind or cycle power). All campsites, all campervan areas, medical tent, water pump and production areas are off-grid and renewably powered with no bio-diesel used. A small solar rig powers the public Box Office. The carparks are powered by solar tower lights.

AGF Community Action Award
9k cap Greenbelt Festival is a camping festival in the UK, since 1974, is exemplary in its social impacts and positive external reach, through its festival policies, the line-up, and the traders that it welcomes. Greenbelt supports local businesses by purchasing food from local suppliers and furniture from local charity shops. Festivalgoers donate thousands of pounds worth of food each year to the local food bank. They have achieved Gold in the Attitude is Everything accessibility standard, and for many years worked hard to ensure gender balance within their line up. They pro-actively book and profile LGBTQ artists, and have a diverse board of trustees. There are a huge number of workshops and talks on topics of social inclusion, peace and environmental balance, which are also available online.

AGF Greener Creative Award
Magical 5-day camping festival in Thailand, Wonderfruit’s décor is made up almost entirely of natural materials, even using rope in place of nails and you would be a very hard stretch to find a plastic cable tie on this site. The event work with architects in the design of their structures. They have a large storage space and containers where materials are stored and sorted to be used year after year. The care, passion and creativity of these festivals are stunningly expressed throughout the whole site.

AGF Circular Festival Award
18k cap Øya Festival is a non-camping urban event in Oslo, Norway. Most of their signage and decor is designed to be reused year on year. Reusable cups are used (and reused!) and refillable bottles are provided to volunteers and crew. The festival continues to reduce the weight of materials that are not reused, and these are meticulously sorted and separated into 15 fractions for maximum recycling. Used cooking oil from caterers is used as fuel in a tour van. Coffee grinds are used by a local business to us in bars of soap. The heat from the sewage works process is used to warm buildings in Oslo.

AGF Water & Sanitation Award
Strawberry Fields has 100% composting toilets, excellent reuse of water for their dishwashing programme, and watering of natives and vegetation in the permaculture gardens during the build. The education around the riverside event in using only organic sunscreens works well and the showers are few in numbers and limited in the hours of operation.

AGF Greener Innovation Award
90k cap Sziget festival in Budapest this year introduced a mobile composting system, where cutlery, plates and food waste were collected from vendors in the Mama Earth Eatery, ground-up on-site, and composted using this facility on the island as an experiment. Compost created there is being used for the recultivation of the Óbuda Island where the festival takes place, and the operation is being expanded further in 2020.

AGF Pied Piper Award (Greener Communications)
We Love Green not only host debates, talks and workshops around sustainability within their event, but also have online interaction with audiences throughout the year raising awareness and action around social and environmental topics. Furthermore, We Love Green have instigated the Green Europe Experience (GEX) collaboration between 6 European partners with the support of Creative Europe, to tackle scenography and food sustainability. They are also an active part of the Green Deal Circular Festivals collaboration between fellow festival organisers from all over Europe.